A few selected maps and one report, all relating in some way to the Pitt River Watershed.

And a few images in a not so common format, from the Lands Office. Both are of the Upper Pitt River, and show some of the premptions.  You will need to have one of the appropriate converters installed since they are both in MrSID format ( Download Screen )      PNWS02Tr07    and   PNWS27Tr01


NOTE:  If any of these links do not work, please email me, and I will host the documents elsewhere.
The links are all to the FTP sites of the Chilliwack and Squamish Forestry Districts

Posted by niftyniall at 11:43 AM No comments:

Will it never end?  Sadly more folks will see this stuff and think that they can find it, and quickly find out that the area is fairly difficult to traverse in many places; should keep the local SAR community busy.
Shaw Cable Press release: Preview
The History Channel:   Curse of the frozen gold

Slumach must be laughing in his grave, local  Pitt River Lodge operator involved too.
And another who crashes helicopters and likes tall tales, with his friends who likes to spin stories of Nazi gold in the B-25 crash site

YES there is gold in the area, not much, but through very hard work you may make enough to buy yourself a meal.  And the funny thing is it is not far from where Slumach actually lived, NOT far away up the lake.

All we need now is a legend of a giant lake monster, rub his belly and he grants you three wishes. :)

And please remember folks that the lake and river have claimed many lives through the years, and many times the bodies were never found; must be those damn giant lake monsters. AKA Sturgeon
Posted by niftyniall at 7:02 AM No comments: 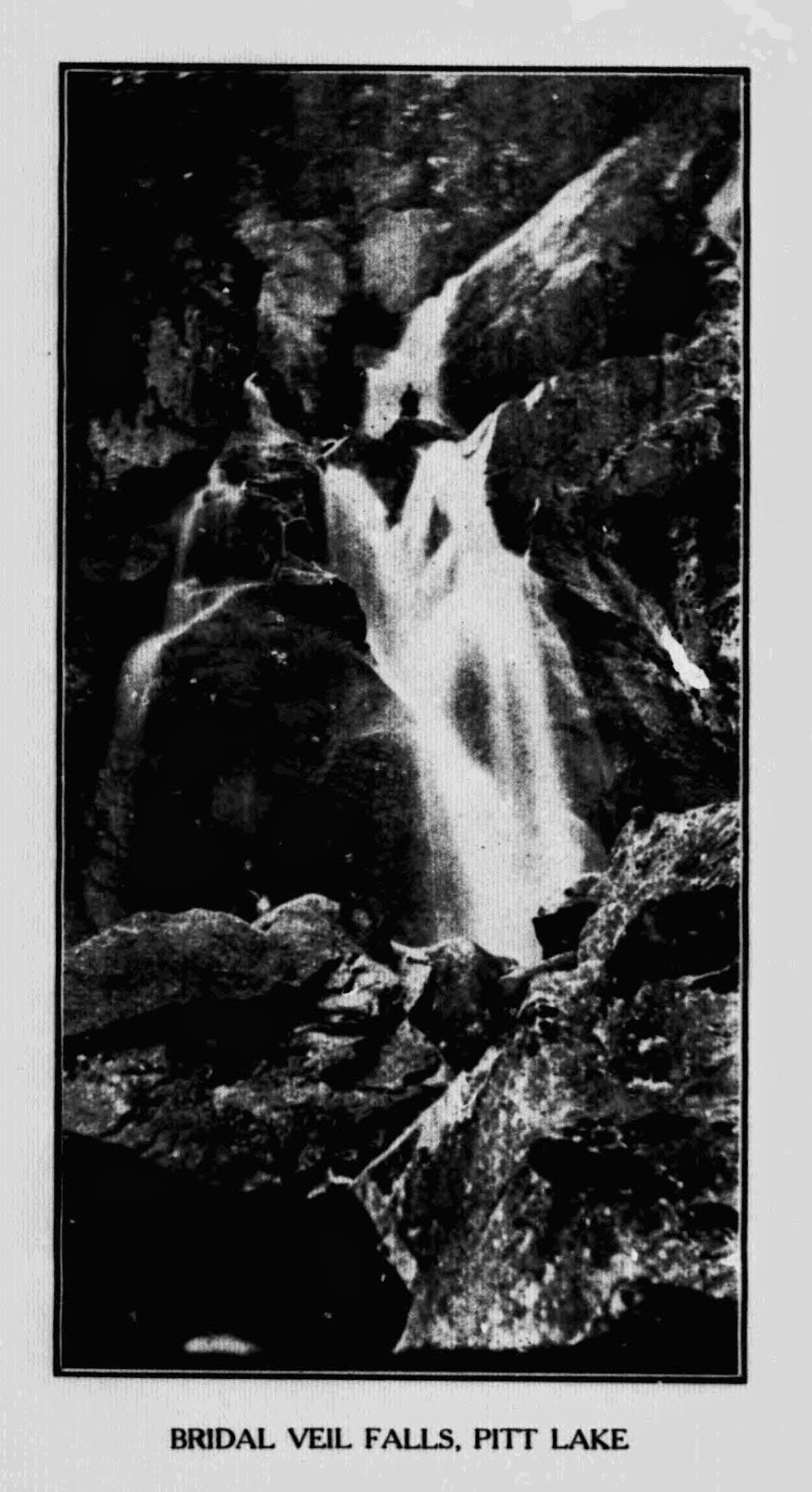 Though it is of a poor quality, it matches the image on the postcard, below where the photograph is attributed to:  New Westminster photographer W.T. Cooksley.  with a view of three people at Bridal Veil Falls, Pitt Lake  (circa 1905-1907) 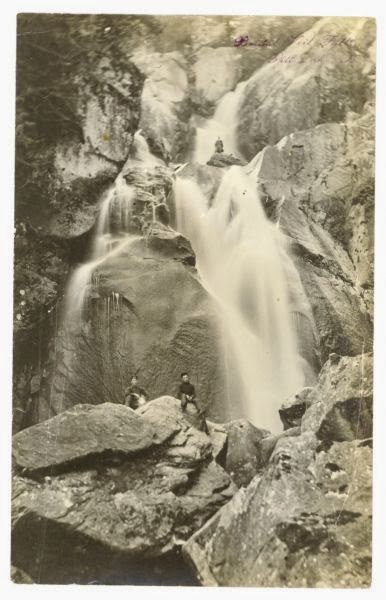 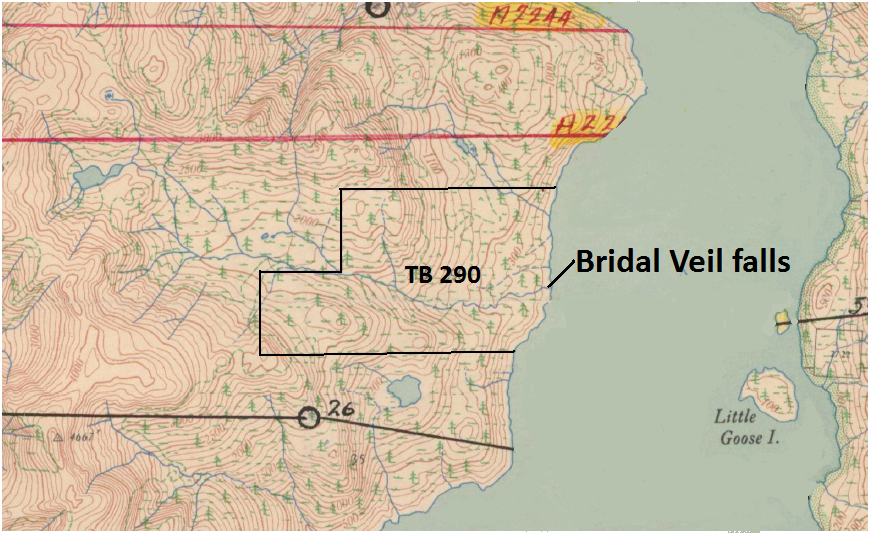 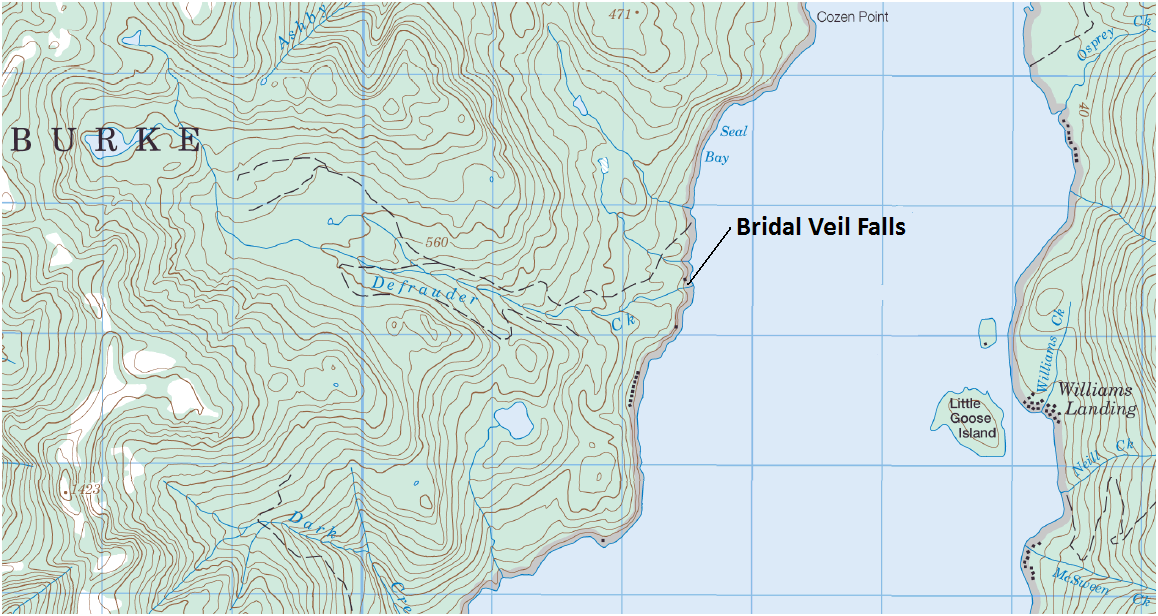 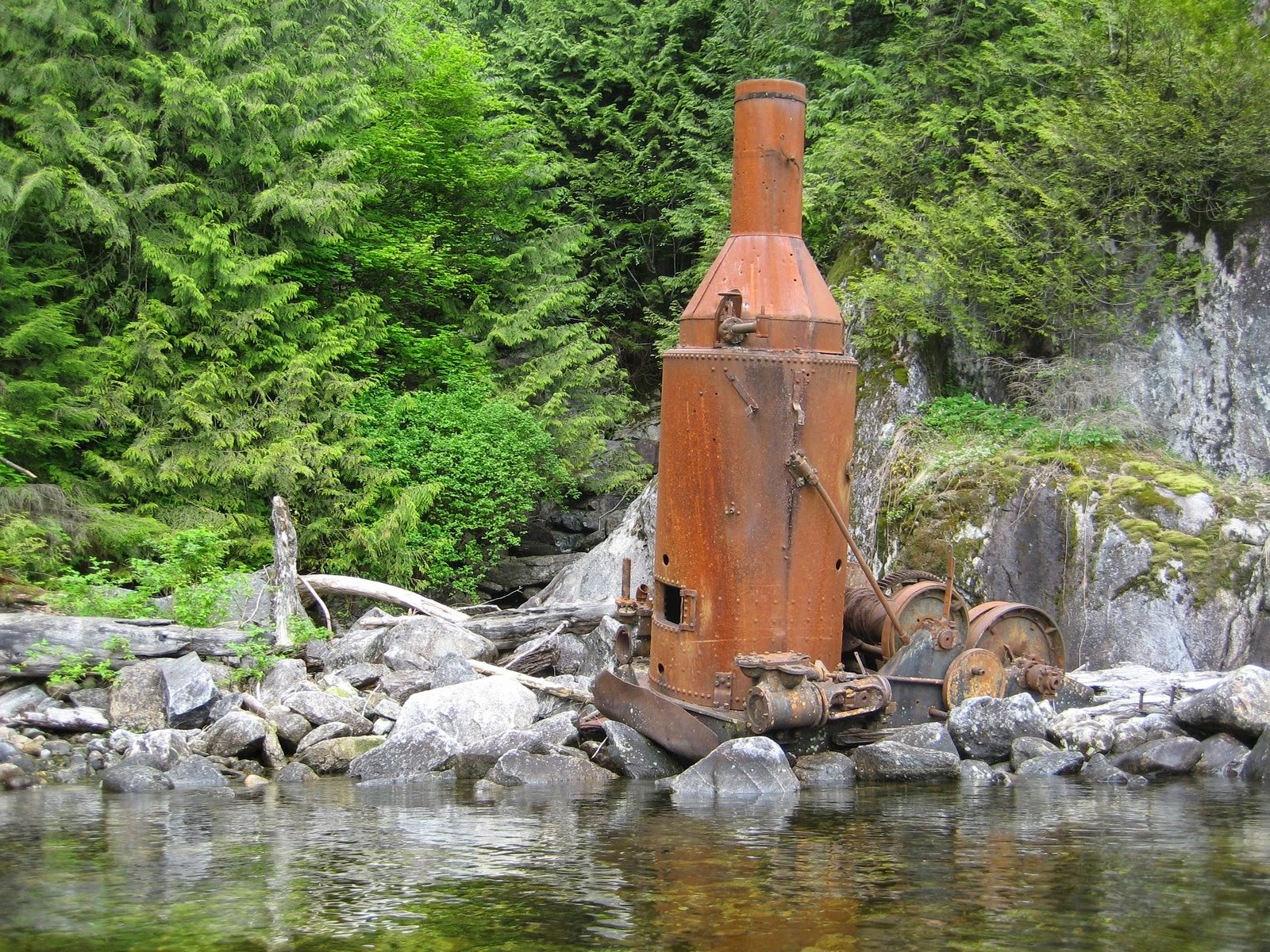 photo by: Richard Teszka 2007
Abandoned on the west shore of Pitt Lake just north of Defrauder Creek.
This is a logging donkey relic from the logging of TB  290, it was built by the Washington Iron Works, Seattle, Washington  C/N 1502  and is a  2 drum [duplex] yarding setup. It was originally further up onshore, but a tugboat company in New Westminster attempted to recover the unit, and gave up after pulling it along the shore, and the log skids crumbled, and it was caught up in the rocks.

Washington Iron Works was a company in Seattle, Washington, founded by John M. Frink, (1855-1914) that built these steam skidders. The company was active from 1882 until the 1980s when its various divisions – manufacturing cranes, logging equipment, and presses – were gradually sold off. The Works closed in 1986.

Washington Iron Works built these machines in three sizes, 9x10¼, 10½x10¼ and
12x12. Demand for these yarders remained strong until about 1915 then fell off as more
sophisticated logging methods came into use. Washington built their last compound geared
yarder in July 1923 with only a handful sold in the previous five year.

The Pitt Lake unit is one of only six remaining, and should truly be in a museum.


A road leads up from where the donkey engine is and an old camp from the 1940-50's? is to be found above the falls, a small gypo sawmill is there, huge pile of waste, and collapsed buildings. There is also a crib dam in Defrauder Creek, filled with rubble, which was used to generate power at one time.

At one time there was also a cabin at the foot of the falls, and a relative of a friend of mine lived  some of his last days there, until health concerns brought him out to "civilization" and shortly after the cabin was vandalized and burned, which sadly seems to be a typical fate for many buildings along Pitt Lake.

This area today is all inside  Pinecone Burke Provincial Park, and continues to be popular with recreationists, as it has for many generations.

It has always been Bridal Veil Falls to me.
Posted by niftyniall at 12:27 PM No comments:

More common the past few years to have aviation accidents in the Pitt Watershed than marine accidents, very telling about the quality of training of aviators. Overdue for fatalities; the clock is ticking.....

Two taken to Abbotsford Hospital after Pitt Lake crash   ( video, but not of crash site )

I will add to this as more information becomes available.

it was a Schweizer 269 helicopter, looks like a RC chopper on steroids !

Small and Bucklin was a large logging, sawmilling outfit from the U.S.A., that at one time also had extensive timber lands along Pitt Lake, and also in the Upper Pitt River. They had a sawmill in New Westminster, among other activities elsewhere.
In my researches into the Pitt Watershed it is unavoidable not to come across information about their activities, sadly only the negative things were reported in the newspapers, and they were frequent.
Recently I came across an article from 1911, here it is: 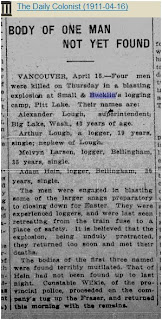 
BODY OF ONE MAN NOT YET FOUND

The men were engaged in blasting some of the larger snags preparatory to closing down for Easter. They were experienced loggers, and were last seen retreating from the train fuse to a place of safety. It is believed that the explosion, being unduly protracted, they returned too soon and met their deaths.
The bodies of the first three named were found horribly mutilated. That of Hein had not been found up to last night. Constable Wilkie, of the Provincial police, proceeded on the company's tug up the Fraser, and returned this morning with the remains.

The strangest thing about this event is the fact that even though the police were involved, none of the deaths were registered in British Columbia ! I frequently run across  this problem, but never on this scale with four dead men.

Due in great measure to the evidence that was given, at the recent trials for perjury in New Westminster, the management, of the Small & Bucklin lumber mills in the Royal City have decided to dismiss every Hindu in their employment and to replace them with white labor. This decision was arrived at only after long and careful consideration of the circumstances in connection with the charges.

It will effect about ninety Hindus, who resided in shacks, the property of the company. in order to make the decision all the more effective, the demolition of the shacks was commenced at once and the majority of them razed to the ground by fire.

ln the course of the evidence at the recent trials it was alleged that, in order to retain their jobs, the Hindus had been in the habit of giving bribes to certain officials, and the management were influenced in the step they have taken by this fact.

C.A. Woods and W.B. Vaughan were accidently drowned while booming logs for the Small and Bucklin Lumber Co., at Pitt River.       Also not registered at BC Archives. 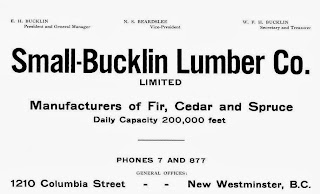 AD from 1914 in the Henderson Directory


This is just a little taste of what I have about the Company and its history.  And Yes, Bucklin Creek, in the Upper Pitt River is named after Edgar H. Bucklin. In their operations in the Pitt watershed I have lost count of how many died getting the wood to the mill,  must be over twenty.

Small & Bucklin sawmill with stacks of lumber, buildings. ca. 1920.
New Westminster Archives       IHP0958
The sawmill was located at 1210 Columbia Street, New Westminster. Today in 2013 it is all residential 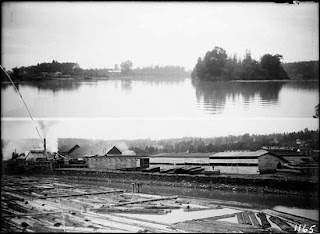 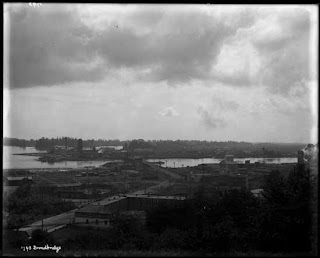 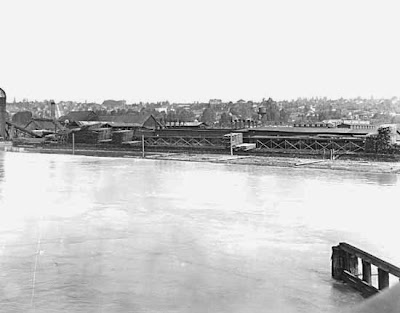 Burke and Widgeon a hiker's guide

A local hiker Lyle Litzenberger has recently published a book primarily focused on the trails in the Burke Ridge( Mountain) and Widgeon Creek areas.

Newspaper article:  Burke, by the book

Long overdue, I hope that this book is widely read and enjoyed.
Posted by niftyniall at 4:12 PM No comments:

These photos were taken many years ago, (mid 1980's) no idea how these pictographs have fared in the meantime. They are up on the western side of the lake about mid way.

Please look at, but do not touch or alter these important pictographs in any way. 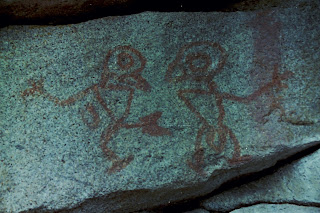 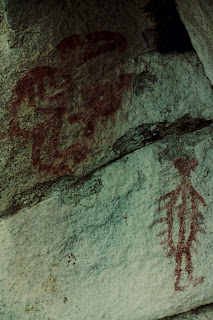 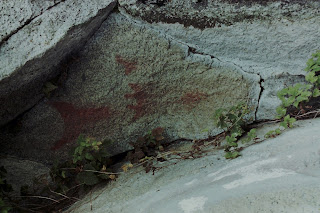 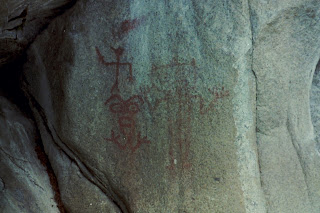 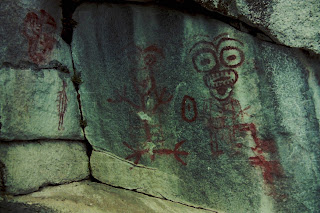 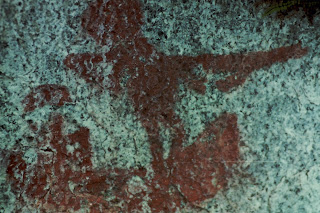 This image appears to be two people in a canoe, with one standing and pointing a rifle? 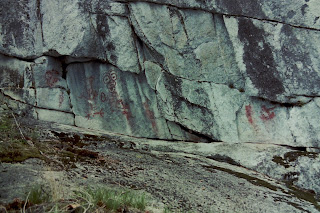 General view of the most visible pictographs from the lake.


There are more than these photos show. Scanned from negatives.

DiRp 7. Midway between Cedar Point and Bridal Veil Falls on the western shore of the lake. Lundy 1972.

DiRp 10. On the western shore of Pitt Lake near Cedar Point about 150 feet south of site DiRp 7. Lundy/Oliver survey 1972.

DiRp 1. On the western shore of Pitt Lake, opposite the northern end of Little Goose Island, and just south of Bridal Veil Falls. Jennes 1935, Lundy 1972.

DiRp 6. On the western shore of Pitt Lake, opposite the northern end of Little Goose Island and just north of site DiRp 5. Lundy 1972.

DiRp 5. On the western shore of Pitt Lake, opposite the northern end of Little Goose Island and just south of Bridal Veil Falls. Lundy 1972.

DiRp 12. On the western shore of Pitt Lake, about 500 meters north of site DiRp 4 and directly opposite the mouth of Raven Creek. Lundy/Oliver survey 1972.

DiRp 13. On the eastern shore of Pitt Lake about 600 meters north of the outfall of Raven Creek, Lundy 1972.

DiRp 4. On the western shore of Pitt Lake south of Goose Island and opposite the mouth of Raven Creek. Lundy 1972.

The listings above are from the 1974 M.A. dissertion of  Doris Marion Lundy, in her report:
Rock art of the Northwest Coast ( PDF )

Maps of the area

Maps that cover Burke-Pinecone Provincial Park, and surrounding areas. These maps are in 1: 50 000 scale, except for the geology maps.) These are all fast links to their Geoscan pages, from Natural Resources Canada, just click on “more”, which will open up a larger listing of options to the different map options, Geopdf are digitized pdf’s which allow you to customize the layers, and create your own maps. They all download in their own separate zip formatted folders, just open the folder and drag the map onto your desktop.
Vancouver North, Coquitlam, and Pitt Lake map Areas, British Columbia With Special Emphasis On the Evolution of the Plutonic Rocks; Roddick, J A. Geological Survey of Canada, Memoir 335, 1965, ; 276 pages.
( Three maps and three drawings are included in a zip file of the entire book.)

I personally do not believe in any of it, the Mitchell bomber site and the wreckage, should be left alone as a memorial to the crew who died there.

One of a set of raw video about the curse of Slumach Item : MI-475 - Lost Mine - tape 18
original raw footage for "Curse of the Lost Gold Mine." Includes an interview with John F. H. Thompson, a geologist at UBC, who talks about the geology of Pitt Lake, shots of a map of Pitt Lake and Michael Collier plotting out a route on the map, also includes an interview with Mike Boileau, who has been looking into finding gold in the Pitt Lake area since 1979, he talks about the curse, the stories of Pitt Lake, and his own experiences at Pitt Lake.
This video is part of the Series S4 - Curse of the Lost Gold Mine series located at the Vancouver Archives.